The MRI, PET and recently developed High Performance Computing Platform (and the associated molecular imaging capability which includes the flagship research cyclotron) are also associated with the National Imaging Facility (NIF). 10 per cent of instrument time is assigned for access by NIF researchers.

During the first round of the project, professor Jim Lagopoulos from Brain and Mind Research Institute will be the main customer who will use the system to upload/download images and records, query images and records, pre – process images, link records, manage permissions, advertise publications.  The automated system will save the professor tones of valuable time and simplify the process to share, manage and analyse research records.


This project will result in human brain scan data (structural and functional) and numerous associated Neuropsychological and  Electrophysiological tests being integrated to produce an analysis resource that will help in the study of brain function / human behaviour and advance research that allows improved diagnosis and treatment of diseases.  It will be relevant to a range of government portfolios, including Health and Ageing and Innovation, Industry, Science and Research.
Posted by Unknown at 15:38 No comments:

One of the main problems in Brain and Mind Research Institute is that there is no such a tool the can efficiently and effectively collaborate the data captured from multiple test.  The researchers need to put the data and the images together manually in order to perform analysis.  Another is the pre – processing of the MRI images. In order to read the image, research needs to pre – process the raw image from the scanner. Professor Jim Lagopoulos spends hours and hours a week just on helping the pre- processing because he is the only person who has the expertise to do it quickly.


These manual processes consume significant time and effort, replacing these by an automated process will be a huge success in the research area.


The system will improve the process efficiency by replacing the manual pre – processing to an automated pre- processing based on the researcher’s requirement.  Moreover, system integrates multiple sources of records and presents the summery of linked records according to user’s query, giving the user an overall view of related records. This automated functionality is previously not existed in this research filed of BMRI the University of Sydney.


The new process and functionality that will be brought by the application is highly welcomed by the researchers in BMRI, users keen to have an application that


-          Can integrate, manage and store a diverse range of clinical research data.

In the mean while the system shall also:


The users will perform and approve completion of the User Acceptance Testing (UAT) that will prior to the application moving into a production environment. The users will be sourced from both project team members and where possible users that are not part of the team except for UAT purposes.
Posted by Unknown at 15:37 No comments:


Imaging and clinical testing is not limited to neuroscience and mental health research, but extends to the University's research priority areas of cardiovascular disease, diabetes and obesity clinical research. As such the system will be developed to be disease independent and re-deployable for other systems (this will include the USyd Centre for Obesity, Disease and Cardiovascular Disease (CODCD) or other research programs as required)  The system will be designed to be able to be redeployed to other sites outside the University of Sydney.  The source code will be documented and packaged within either Google Code or SourceForge, enabling download and installation elsewhere. During the project we will communicate our developments and progress with other Universities with a view gauging interest in redeployment and collaboration e.g. ANDS Distribution list and other meetings.


The project will produce RIF –CS service description and associated RIF-CS collection description, along with related party and activity descriptions where relevant. The data collection described and fed to Research Data Australia will have data accessible for re-use, via a form of public / mediated access. This enables the research data to be searchable.


A high level document illustrating the overall design of the software system including instruments, data sources, users, and location of information will be presented.  Training manual and software specification will be written for the purpose of user training.


The team will deposit the open source of the software in Google Code or Source Forge, accompanied by developer manuals to facilitate re-use.


Currently the application/developer is still under selection, the team is evaluating the options against the selection criteria.
Posted by Unknown at 15:37 No comments:

The Univerisity of Sydney has chosen Daris as the solution software. The sofware sits on MediaFlux's server and provides functions required by University of Sydney researchers.
The key functions required that Daris will be able to produces are:
The solution components are broken down into the following:
The BMRI solution consists of the components listed below and its integration purpose: 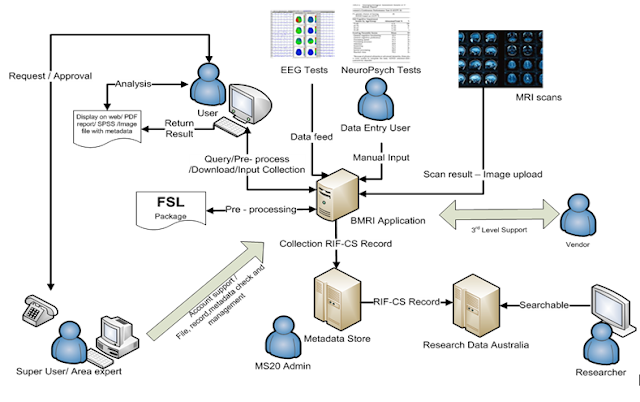 
Daris - The University of Melbourne

Dr Neil now supports the project solution application - Daris in The University of Melbourne, and is the key product team member.


The University of Sydney


Jim’s research focus lies in the area of Neuroimaging. Of particular interest is the interaction between prefrontal cortex and subcortical substrates in the regulation of emotion and how these networks are specialised for the detection of behaviourally relevant stimuli. In the area of neurophysiology, Jim have focussed on intraoperative techniques including electrocorticography in the planning of epilepsy surgery as well as techniques for mapping brain function during surgery for the resection of brain and spinal cord tumours.
For more details, please visit the website below:
http://sydney.edu.au/medicine/people/academics/publications/jlagopoulos.php

Medicine, Scholl of Mediacal Sciences Brain & Mind Research Institute.
Daniel Hermens (PhD) is a Senior Research Fellow at the Brain & Mind Research Institute, University of Sydney. He has over 12 years experience as a clinical neurophysiologist and his research has primarily focused on the neurocognition of young people with psychiatric disorders (including ADHD, psychosis, bipolar disorder) and, more recently, the effects of substance misuse.


Daniel’s research utilises neurophysiological measures, such as event-related potentials, to better understand psychiatric disorders and substance use in young people. Daniel current interest is in the early stages of psychosis and bipolar disorder as well as alcohol misuse. Daniel is incorporating cognitive and neuroimaging measures to further probe the underlying neurobiology of these disorders.
For more detail, please visit website below:

Mr Neal Anderson
Project Manager
Information Communication and Technology, the University of Sydney
Neal has worked in the IT industry since 1999 in a variety of roles from business analyst programmer, project manager, and currently is the Programme and project manager for externally funded EResearch projects.
He has been employed at the University of Sydney since 2007, originally working on various Human Resources application projects, and has been involved in several ANDS/NecTAR funded projects since late 2011.


Mental health and Neuroscience research programs associated with the University of Sydney headspace services, and the Healthy Brain Ageing programs are undertaken at the Brain and Mind Research Institute. The data obtained from the brain scans and the neuropsychological and electrophysiological tests generates the research project’s raw data. This raw data is enriched by

contextual information critical for use and reuse.  Integration of the data result will direct value to clinicians caring for patients, provide convenience for research to perform analysis and link records for research reference.

To integrate various (a) imaging, (b) neurological & electrophysiological testing data and (c) clinical data for the purpose of providing a refined answer to complex research questions that is not currently possible using the separately existing (and expanding) data sets across the clinical research programs at BMRI making use of brain scans.
The project will provide the integration tool for the multiple data sets and data points within data sets and develop an analytical tool for interrogating the data in response to specific research questions for example researchers at the BMRI (Brain Mid Research Institute) I are trying to establish if there is a characteristic pattern that emerges from our structural imaging data and a specific electrophysiological component that predicts with some degree of accuracy a clinical phenotype, such as depression in young people.

The system developed through this project will provide an integrated research data set to be expanded and used for future research projects. An additional objective is to integrate contributions to the data set from other clinical researchers and to make the larger data set available through research collaborations.

The outcomes of the project will provide data and an analysis platform for the development of information based diagnostic and treatment response algorithms for young people with major mental health problems like depression and psychotic disorders, as well as ageing subjects.

AP24 is aiming to provide a software solution covering the following functionality:


1.       Integrate large and sometimes disparate data sets held in SPSS and provide a platform to enable data transformation and analysis by authorised parties.


2.       Provide an analytical tool for interrogating the data in response to research questions (of the type discussed above).


In cases where a research subject is under clinical care, and research findings may provide additional diagnostic support, provide mechanisms for communicating findings to the clinician.